Although not widely known Denmark was heavily involvement in the “First Golden Age of Rocketry”. Their development of a dedicated Rocket Corps and of manufacturing facilities put them, for a time, among the leaders of the nations who adopted Congreve’s rocket system.

Although not widely known Denmark was heavily involvement in the “First Golden Age of Rocketry”. Their development of a dedicated Rocket Corps and of manufacturing facilities put them, for a time, among the leaders of the nations who adopted Congreve’s rocket system (1). Recently however, I learned, quite by accident, that the Danes (and some other nations as well) used a very different type of “rocket” to the type associated with Congreve’s name.

In the course of researching two other mid nineteenth century innovations, the needle gun and the Espingol, I received a translation from a friend dealing with the fighting at Almind on April 1849 where both were used. As I read the narrative I was surprised at the mention of the use of devices translated as “rifle fire rockets” (from the German “Geværraketter”) by the Prussians. The account which was drawn from Otto Vaupell’s book (2) reads as follows –

“At the same time as the Prussians attacked Almind they had also moved against Donsmølle with a battalion, two squadrons and two guns. The crossings near the mill, which was defended by the 7th Line battalion and four guns had been rendered impassable. The bridge had been destroyed and the fords had plough harrows buried in them. Nether-the-less the Prussian skirmishers advanced firing “rifle fire rockets” into the mill. After a few shots the mill was well alight”.

To say that my curiosity was aroused is an understatement, especially, when the translator went on to mention in passing that, from his own research, each Danish unit was also supplied with a box of these weapons.

At first I thought that the device was some kind of rifle grenade but after much investigation I finally learned that as the device had no exploding mechanism it was not really a “rifle grenade” at all, but rather something more correctly described as a “rifle fire rocket”.

As can be seen from the accompanying illustration it consisted of a cylinder made of thin copper/tin plate of 17 gauge. One end was sealed with a flattened bullet while the other consisted of a tin plate with a small hole in the centre through which the combustible mixture which filled the cylinder was ignited. The device was then packed into a paper rapping with 98 grains of power. Its design allowed it to be fired from either smoothbore or rifled weapons and, for the Danes at least, the devices were not part of the infantryman’s ordinary issue but instead were kept in the battalion ammunition carriage. 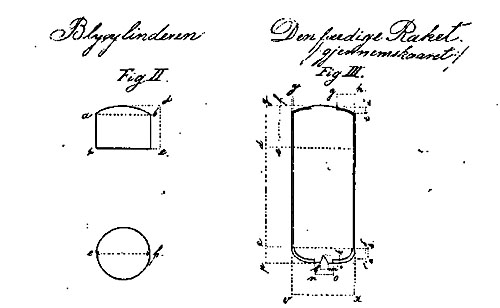 As the device was designed to be used as a substitute for an ordinary cartridge the procedure for loading a R.F.R was little different to the usual drill. The R.F.R. was taken out of the rapping and the powder was poured into the barrel. The R.F.R. was them inserted firing hole first and the wadded paper was rammed home to ensure the rocket could not fall out.

The real difference between it and a normal cartridge occurred after the weapon was discharged. The igniting of the charge propelled the device out of the barrel in the usual way but in the process ignited the charge contained in the cylinder increasing its velocity and making it into a crude rocket. However, in this case it does not appear that increased velocity was the primary intention.

This immediate ignition, an uncontrolled trajectory and its weight point to the device being used as s short range incendiary weapon for use in fighting which involved buildings. In such circumstances it was fired either into windows or onto the roof to set the structure on fire and as a consequence drive the defenders out.

Just how successful the weapon was is difficult to determine as it is seldom specifically commented on in battle reports indeed even the mention it receives in Vappell’s account of the battle of Almind is not included in the exhaustively detailed general Staff history of the same battle. It has been suggested that the reason for this silence lies in the fact that the device’s use was so routine that it attracted no comment. However at least two other factors could contribute to this relative silence.

It could be that it was found to be less than successful due to the fact that, even when fighting involved buildings, their construction meant that it was ineffective. Slate rooves and heavily shuttered windows would have either prevented the device from having the desired effect or dramatically reduced its penetration. 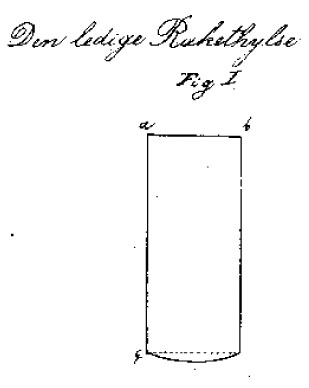 Regardless of the reason for the apparent lack of documentation it is clear, as Vaupell records, that it could be effective. A reality further supported by the fact that RFR are considered to be responsible for the destruction of buildings in both Isted and Over-Stolk during the battle of Isted in July 1850.

The device also took another form which is worthy of mention. As can be seen from the illustration on the right in this case there was no bullet at the top but instead the entire tube was filled with the combustible material which enabled it not only to further increase its velocity but also to go much further. In this form the device was used for signalling purposes and was given the name “rifle illuminating rocket” At present we can only guess as to its effectiveness in this role.

Other details of the history of this device such as who and where it was developed remain un-researched at present. The fact that the Prussians also used this weapon suggests that there is a possibility of there being further sources of information in that direction and that its use may have been more wide spread. Only time and further research will tell if there is another chapter in the story of this most unusual weapon.

(1) Frank Winder provides a detailed description in his book on the subject, details are in the bibliography.

(2) One of the better histories of the 1st Schleswig War. Full details of this book